The Half Marathon Event created a huge wave of positivity! It was a success with all the runners finishing safely. They were delighted with accomplishing a half marathon. The Fun Day was packed with everyone I knew! It was really special to see everyone turn up to support the day. A huge thanks to everyone involved!

A few pics from a day I will cherish forever. It was an outstanding effort by the closest people in my life. 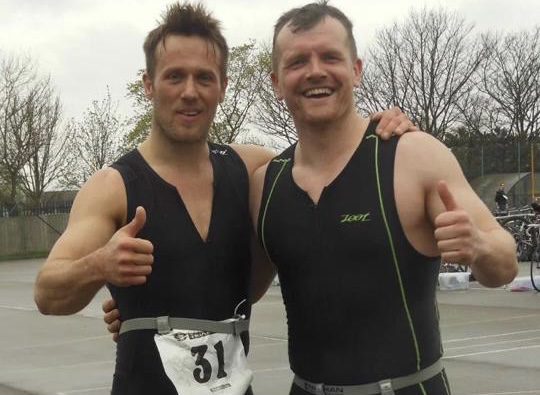 It’s only now at present day (5/9/14) that I can really feel the joy of that day. I was well enough to be running a half marathon which was fantastic, but I still was mentally unwell.

One year into recovery I had made lots of progress but still had a long way to go!

I looked fine and tried to act fine which did me no favours. I was still slow cognitively and had a poor memory. I felt emotionally blank which I was noticing a lot. I knew intelligently how I should feel and used that to cover up my lack of emotion. The connection to emotion just wasn’t there as it was before. I was still learning about myself and my new brain.

This Identity and Emotions After Acquired Brain Injury booklet has been produced in partnership with the Department of Psychological Services, Hull University Teaching Hospitals NHS Trust.

I had got caught up in the whirlwind of the Half Marathon Event. My limited capacity had been taken up with the event. It was all I had thought about and focused on. Looking back, I had taken on too much too early. It was only afterwards that I noticed I was less tired, agitated and confused. In this case I think it was worth it for the amazing outcome of the fundraiser, but generally, hitting overload is not going to do you any favours!

I recommend being careful that you are not taking on too much. If you start feeling tired and agitated, stop. Take a break, relax and recharge.

Try and remember to take regular breaks – preferably in silence and without mobile etc. Just you and your thoughts. Relax. This is something that I recommend you fit into your daily lives. You should feel naturally better in your mood if you include breaks throughout the day.

To be honest, at this time during my recovery I didn’t do it! It’s only now looking back I know it’s something that would have helped me. I’m trying to pass some wisdom on.

Despite the above I was getting back on my feet in life with plenty of support from loved ones. I was back at work and had chosen a good path with my lifestyle. The half marathon event was a huge success. I was still achieving after brain injury!

Going into the second year I would say I was still waking up from the daze. It’s difficult to explain to be honest. I was able to think a little more in depth. My insight was continuing to develop which meant that I had a better understanding of my injury and subsequent challenges. It’s like the heavy fog had changed into more of a mist.

I was still finding work tough. There was no pressure as I was well supported by my colleagues. I was realising how much the injury had affected my abilities. Simple tasks pre-brain injury were hard work now. I would often forget basic instructions. My working memory was poor.

I had been reluctant to admit it, but I needed to use the coping strategies that my neuropsychologist had advised. These would only help and make things easier.

It wasn’t just at work that I needed to use coping strategies, it was in life in general.

I had always thought … no, I will be OK – I don’t need to use them. I had not wanted to change my ways or adapt to a new me. This was a pride thing and a struggle to accept my challenges as permanent.

I think it’s fair to say that humans don’t like change. We spend our formative years developing our identities and habits which help us navigate our way through life. Although we are able to change it feels hard, so we tend to stick to our habits and routines.

Sadly, brain injury can bring changes to both habits and identity. The latter can feel devastating and incredibly difficult to accept and come to terms with. If you’re struggling with changes to identity and need support, I recommend that you contact the team at P.A.U.L For Brain Recovery for some advice – info@paulforbrainrecovery.co.uk

At first it felt strange using new ways of coping in life. But, I was getting annoyed at myself over things I could do something about. I needed to play smart and make things easier for my present and future.

Some strategies I started using:

I was starting to introduce these coping strategies into everyday life. I found they were really useful in helping me complete tasks and keep up with general life.

I spoke to my neuropsychologist about feeling low. I had been positive throughout recovery, but I was feeling increasingly low. I had developed more insight and was able to understand how I was functioning and feeling. This improvement was good but had consequences. Sadly, it made me realise that everything was like hard work. I put a brave face on, but I was hurting every day.

I told my neuropsychologist that I wanted to feel the happiness of still being alive! I wanted to feel the joy of not dying that day. I was lucky to be here and I hadn’t appreciated it. She still didn’t think I understood what had happened to me properly. She also said it’s hard to appreciate something when you are still struggling.

The injury had taken over my life with daily struggles for the last 14 months. And, it wasn’t over. She made sense. I hoped that I would get there and feel the true happiness one day, once the struggle was over!

I was offered anti-depressants for my low mood, but I refused. I saw them as being weak and thought I could pull myself around.

My relationship with Gemma was on the rocks. We were hanging in there but it wasn’t good. Although I was getting better I wasn’t the same person. My focus was on recovery and coming to terms with my challenges. It was Gemma who felt the brunt of my low mood. Home life was no fun for either of us.

I was at home doing my ab exercises when I received a phone call from…the Men’s Health editor! Wow, I really couldn’t believe it. He said the magazine liked my transformation and my motives behind it. He invited me to London for a photo shoot. I was going to feature in the August edition. This was my dream! The ambition of getting into Men’s Health to be hope for other people affected by ABI was becoming reality.