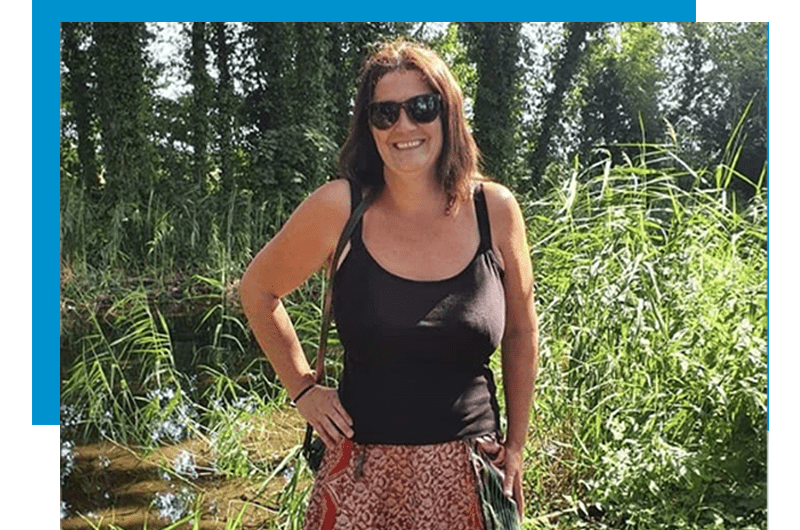 I had been suffering with tingling in my forehead since the age of 18. It was formally diagnosed as neuralgia. At the age of 26, I started having problems with my right eye. In time other symptoms started, the oddest of them all was the cold feelings that I got on top of my head. My balance got progressively worse, I fell over frequently and some people even thought I had a drink problem! Then I had earache and I could hear high pitch sounds. Every visit to the GP resulted in the same verdict – “there’s nothing wrong with your ear.” Then late one Sunday morning, after my usual lie in after having 12 hours sleep, my left arm and leg went numb and tingly! In September 2004, I had my first MRI scan. I saw the Neurologist who said ”you have a brain tumour the size of a satsuma. The brain surgeon will be down to see you in five minutes.” The operation went very well – I survived! However, I was left with a lack of feeling in the right-hand side of my face and tingling, blurry vision in my right eye and increased sensitivity to the light. Plus, occasional tingling in my left arm and leg. After a while, the tumour had grown back! The operation meant a 3-inch band had been shaved from the top of my head to my ear. I had to get a photo to see what it looked like, and I cried and cried. Despite the initial shock, my hair grew back quickly.

How has the charity has helped?

While I was in hospital I was given information about the P.A.U.L  For Brain Recovery Charity. I really did need to do something to get myself back up and running. I was so glad that I made the effort to get in touch with the charity – it had a positive impact on my life. Meeting others who had been through brain surgery and realising that in contrast to many I had been through so little. Everyone at the group was normal, just like me; they had all been through life changing experiences which had affected their lives. After my first visit to the social coffee morning, I felt refreshed to have met so many amazing people, who had been through so much and were still enjoying life. It was also a relief to meet people who understood my difficulties and hurdles, as they were. When you look normal, people don’t realise what you have been through. Life goes on, regardless.