I was really enjoying my healthy lifestyle. My whole outlook on diet had changed. I kept my eye out for foods that could aid my recovery. I was including these in my meals. This self-care made a huge difference.

The support I received from Humber Electrical Engineering Co Ltd, was superb. The company put no pressure on me to return to work and I received weekly phone calls to see how I was getting on. I was told to take as long as I needed. This really meant a lot at such a difficult time, but it’s 7 months after the haemorrhage and money is tight as the mortgage has to be paid again. I am feeling the strain of having very little income and push myself to speak to my neuropsychologist about returning to work.

I had a chat with my neuropsychologist about returning to work and the potential to continue in my role. She did not have answers as to whether I would recover enough to be a competent electrician. She said it was very unlikely I would be a foreman again. This was tough news to take as I had worked incredibly hard during my career of 18 years. Lack of insight helped to soften the blow of this news. I think it would have ruined me if I could have understood properly!

Selen advised that I should wait and return to work in the new year. I argued against this decision and she agreed that I could return on light duties for 2 days a week. This would be a test as there were no guarantees that I would be able to manage.

I arranged to see my manager, Mike Mills, and discuss returning to work. I was nervous going back into the yard, but it was nice to see familiar faces again. Mike put me at ease and told me that I was well thought of at the company and they would stand by me. I can’t tell you how much that meant! We agreed that I would return 2 days a week and see how I managed. There would be no pressure as I would only shadow an electrician and be on light duties. The return date was set for October 20th, 2012.

I was really enjoying the gym. It takes me away from the negativity of brain injury challenges. I am still quiet in the gym, but my confidence is growing. I still have Men’s Health in mind! I would have to be careful with fatigue levels in going to the gym and returning to work. I was committed to both so determined to make it work.

I had announced the half marathon event on social media. The response was fantastic. There was lots of interest from friends in running and sponsoring. I was overwhelmed with the support.

It’s nearly time to return to work and I have mixed feelings. On one hand, I’m excited to see colleagues, but not knowing how I will cope with something I was really good at is worrying and frustrating. When I tried to think about what I had learned during my apprenticeship and electrical career I felt blank. It was really difficult, if not impossible to retrieve any knowledge. I would have to be brave and see how I got on.

Ready for my first day back at work. I was going to work on a job that was being managed by my brother, Mark. This made me feel much better. 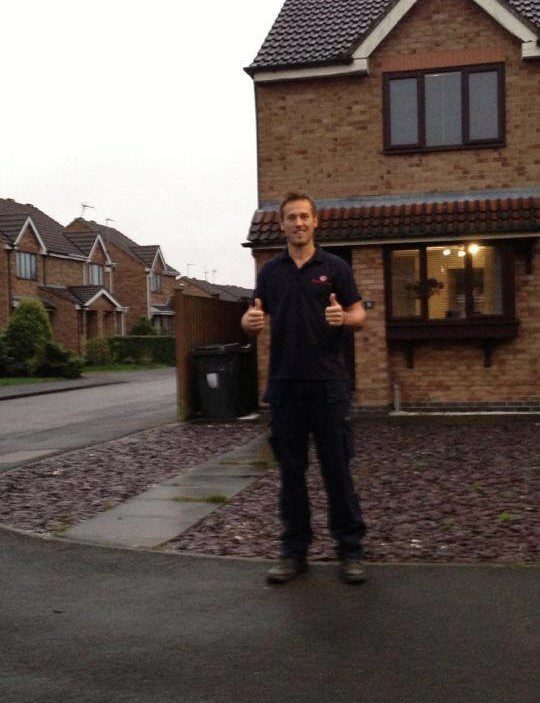 I had ups and downs returning to work – it was nice to see colleagues. I felt good that I was earning money, but I felt extremely vulnerable. There was far too much going on around me. My brain was struggling to process all the stimuli. Returning to work exposed my vulnerabilities and made me realise how slow I was.

I can’t tell you how big a step going back to work was! The environment was like nothing I was used to. I went from sitting alone at home to being on site with 20 people carrying out work. My head was in a spin and it made me feel anxious. I was way out of my depth, and it was frightening. The environment and speed at which everyone was working was overwhelming.

I had returned to work too soon. I had been foolish pushing to go back. Luckily, I had Mark and great work friends to support me. I stuck with it.

DO NOT RUSH TO RETURN TO WORK!

You should only return when you are completely ready and have been signed off by any professionals that are supporting you. This is a massive step in recovery. If you are struggling with money, then I would recommend that you seek advice from a benefits agency. There could be benefits that you are entitled to apply for.

P.A.U.L For Brain Recovery has an advocacy service that can help in accessing these types of services.

My brother, Mark, asked me to be best man at his wedding which was in November. Mark didn’t expect me to do a speech. He understood that cognitive and memory challenges would make it difficult. I wanted to do my little brother proud and thought about writing a short speech I could say on the day. This was if I had the confidence.

There was only ever one choice during brain recovery – give it all you’ve got! Things will be tough, and life is harder with brain damage but just keep moving forward. Try and remain positive and do what you can with the capabilities you have. Be kind to yourself.