I had stopped doing my small workouts due to having low mood. Deep down, I knew at this point that I was going to either spiral into deep depression or do something to help my recovery.

Having low mood meant it would have been easier to sit on the sofa and sink into meltdown. BUT, my inner strength was not going to let that happen – I would NOT be beaten by this injury!

I decided to join a gym. This was going to be a big step as I was vulnerable with cognitive deficits and low confidence. Luckily there was a gym that was not too far from my house. Once there, I stood outside and became anxious about going in. I was worried in case I lost the flow of conversation with staff or went blank whilst talking. I sometimes forgot my own name! I took my time and used some positive self-talk to reassure myself.

I found the courage to go in and arranged to sign up and have an induction with a PT. Yessss – I had done it. I didn’t know at the time but that small step into the gym would turn out to be the best thing I could have ever done for myself!

I found that going out alone and speaking to people who didn’t know my situation was daunting. I would usually get words muddled, lose concentration and be slow. When this happened, it was awkward and embarrassing. These situations would hammer my confidence.

Before I went to the gym for my first session I asked Gemma to take some photos of me. I told her I was going to get into great shape and hopefully be good enough to be in Men’s Health one day (she thought I had gone bonkers). My thought was to give other people, with similar injuries to mine, hope at the start of their recovery. If they could see me in a respected health magazine it would give them a boost.

I didn’t realistically know if I could achieve this dream. I just wanted to help others during their recovery. I knew I would have to get into amazing shape, and I wasn’t at the time – 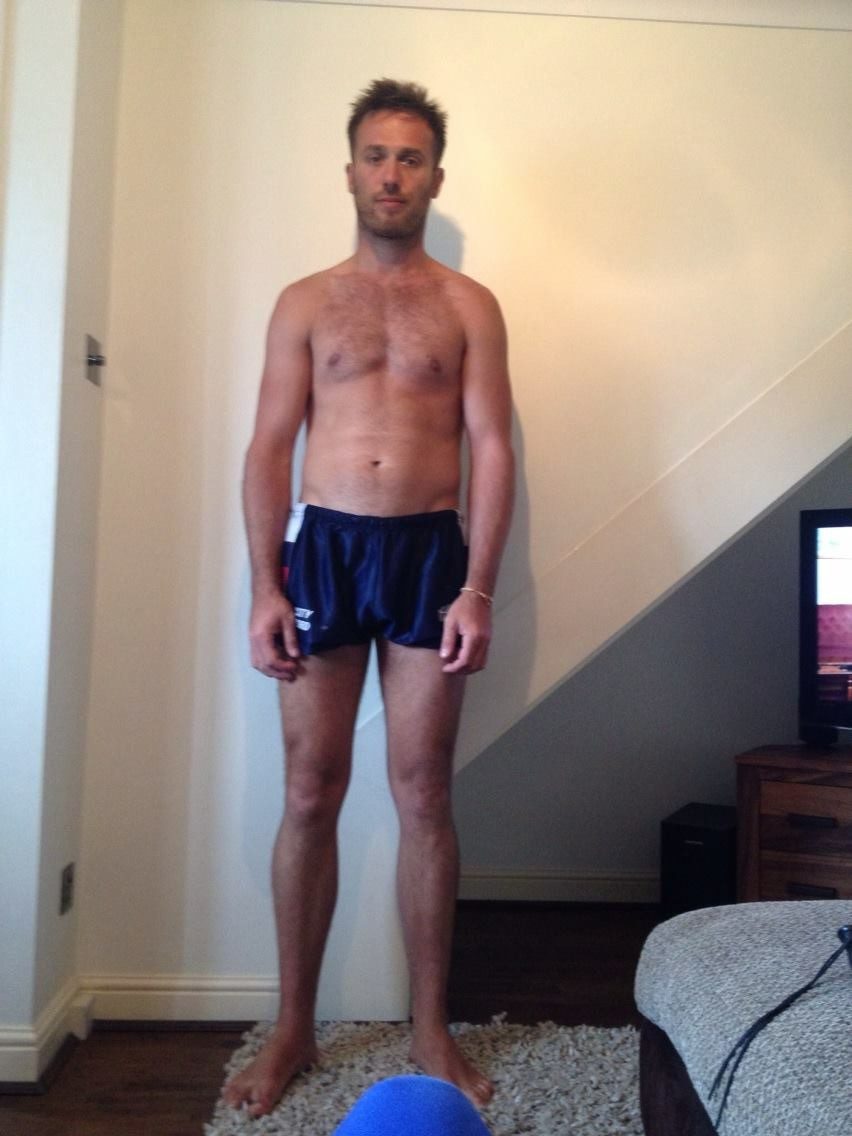 I started the gym and was a bit nervous around people. I kept my head down and became familiar with the new environment. I didn’t want to engage in conversation because I was blank most of the time. I just got on with my own thing and stayed out of people’s way.

I have mentioned that I would often stare into space. Looking back and reflecting I see them as ‘brain breaks’. I think that due to low resources my brain was shutting off when it had an opportunity. When I was having a brain break, I could come across as being ignorant, but I just hadn’t heard because I was in the daze.

If you’re supporting someone affected this might be worth thinking about and making sure you have their full attention.

I was enjoying the gym every couple of days. I was taking it really slowly as I had to be careful with fatigue levels. I became aware that I didn’t really have a clue about what I was doing or if I was doing it correctly. My poor memory meant that I couldn’t remember my knowledge of exercises.

If I was going to achieve the Men’s Health dream I would need professional help. I hired a brilliant personal trainer called Tom Cowen and told him I wanted to be healthy, lean and fit. I explained my injury and challenges which he said he could work with. I told him about my ambition to get into Men’s Health. Tom gave me a diet and we started training once a week.

So we’re in August 2012 now and I am venturing out a lot more with going to the gym and walks to Newland Avenue and Hull city centre. It’s fantastic going out with Reece and Shannon. I really enjoy doing some normal things with them again. It’s not the same as it was and still a long way off, but they try to understand.

Ever since I was a young lad I’ve visited my nana Ev on a Saturday morning. It’s a family tradition. It felt wonderful to do this again with the kids. You were guaranteed a perfect cuppa, biscuits and a warm heart. Not having a car meant that we went on the bus, in fact 2 buses. This was long winded due to the travelling, which was frustrating, but she’s worth it! I was adapting the best I could. 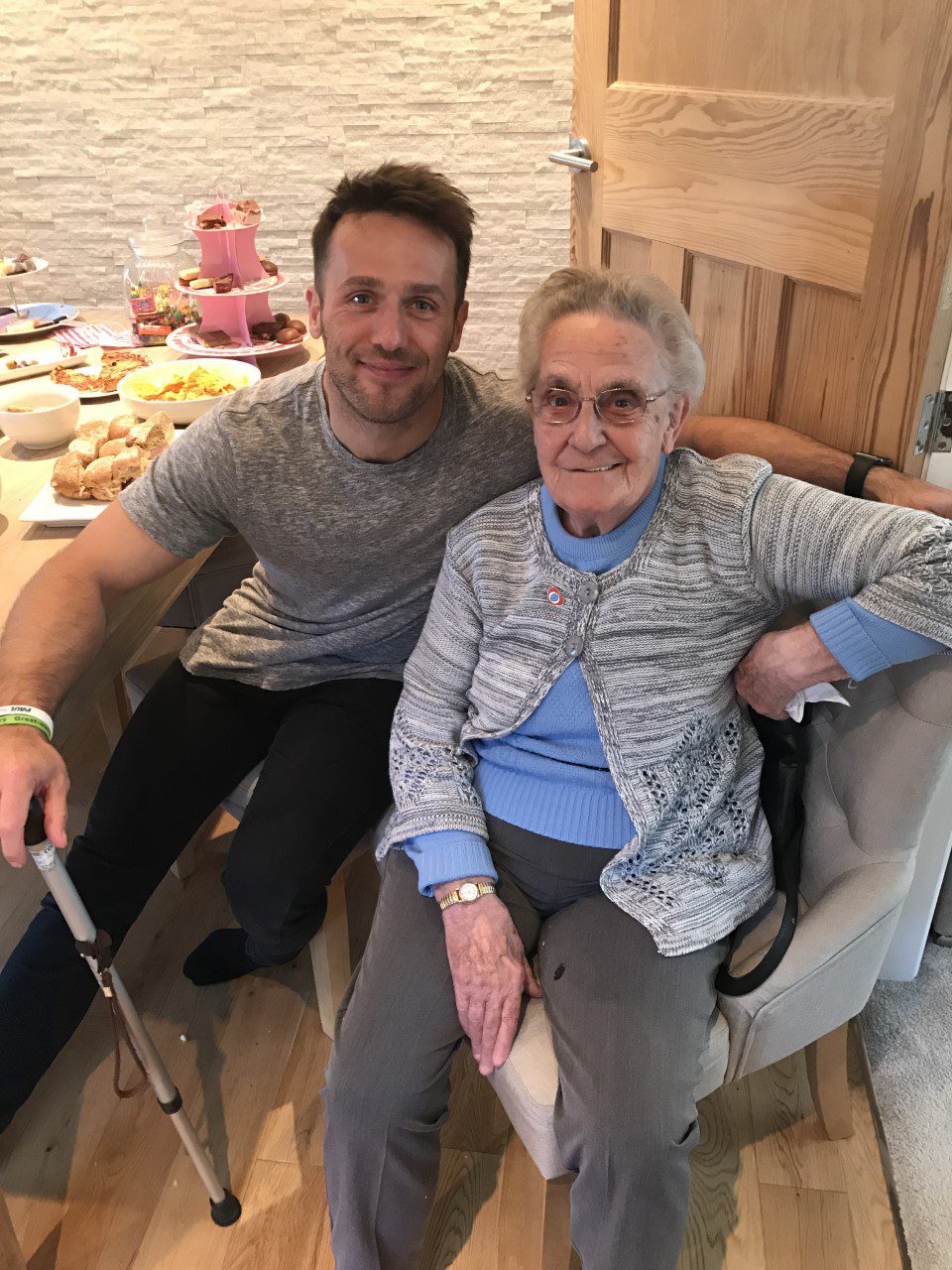 This is 5 months into my recovery. Certain areas of life are definitely improving. My speech has improved, I’m a bit more ‘with it’ and independent. I am able to work out at the gym. Don’t get me wrong, in most other areas I was still struggling but I was making progress.

Looking back, I didn’t appreciate the improvements I was making. To be honest I don’t even think I thought of them. I recommend that loved ones highlight any improvements as they may recognise them better. Any milestone should be celebrated.

I was really enjoying the gym with Tom. He was very professional and didn’t push me too hard, considering my injuries at all times. I was learning new techniques/routines and would write them down to help me remember. There is a cost to having a PT which was tough because I didn’t have much money with not working. I discussed this with my family and we agreed it was money well spent in aiding my recovery.

I was enjoying my new diet and became interested in other healthy options. I researched healthy foods and looked at their health benefits which gave me more incentive to eat them. This made me think about foods to help my brain and I started to research them too. I just wanted to help myself as much as I could.

My brother asked me to look after my nephew Flynn for the afternoon! I felt brilliant that he thought I was well enough and responsible to look after him by myself. This gave me some confidence in my abilities. I really enjoyed spending time with him as I had missed out due to the injury. It was a special day in my recovery. I was ready for a lie down once he had gone though, lol.

My fitness levels were improving. Tom was introducing tougher workouts as I got stronger. I decided to start running near my house. It was just some light jogging which I really enjoyed.

I was seeing my neuropsychologist for advice on things I was finding difficult. I hadn’t noticed before, but I was attending the appointments at Castle Hill Hospital where I had spent 2 years installing electrics on the site during 2010/11. This realisation was quite upsetting to be honest. I had gone from wiring the hospital to sitting in a room, confused and slow. This wasn’t nice! On the bright side, I had retrieved some memories of working there. This was progress and I worked with my psychologist on memory.

With my increased confidence in fitness I started running home 5 miles from Neuropsychology. No one would have thought it a couple of months previous – 5 miles! I was delighted as I didn’t have to rely on anyone for a lift home. I was gaining independence and felt healthy.

Physically I was thriving but mentally I was still really struggling. Cognitive challenges and emotional changes were still the same. I was slow and became confused easily. I didn’t have a wide range of thought and could be narrow-minded. I couldn’t see the bigger picture. Although I was physically fitter, I still suffered with neuro fatigue.

P.A.U.L For Brain Recovery has worked in partnership with the Department of Psychological Services, Hull University Teaching Hospitals NHS Trust to produce a Cognitive Effects of ABI and How to Help booklet.

The path I had chosen with the gym was turning out to be a good one. I was enjoying training, running and eating well. It gave me a positive focus alongside the dark cloud of brain injury recovery. These healthy lifestyle choices were benefitting other areas of my life, including sleep and confidence.

P.A.U.L For Brain Recovery has an education module on Healthy Lifestyle choices. If you’re interested in this or any other module then please contact the charity – info@paulforbrainrecovery.co.uk