The Hull Daily Mail had been in touch and said they would like to do an article on the half marathon event. This was brilliant! I hoped other people with brain injuries would see what was achievable a year after a brain haemorrhage and feel inspired.

Friends who continued to take the time for visits, walks, meals were amazing! The fact they still thought about my situation and adapted social activities to make me feel included meant so much to me.

It took some time to find my feet with changes to socialising. Although I was resistant to different ways in the early days I found that I liked new activities and experiences. I would recommend making changes to suit your needs and optimise recovery.

As the half marathon event drew closer, the more posts on social media and messaging I was doing. I was still finding it really difficult to put the sentences together and keep up with the responsibility of the event. It was a nightmare for Gemma. I kept asking every five minutes to check things. I needed so much reassurance.

At some point in recovery you will start to take more on which is a great feeling. I recommend being careful that you’re not taking too much on. It’s very easy to do too much and burn out. Be careful not to run before you can walk.

For the last year I had not been able to see my past properly. The Half Marathon and Fun day was going to make new, exciting and positive memories. I had 70 runners. People were attending from around the country to join in or support. I couldn’t wait!

Here we go! On the start line of Frank’s Half marathon. 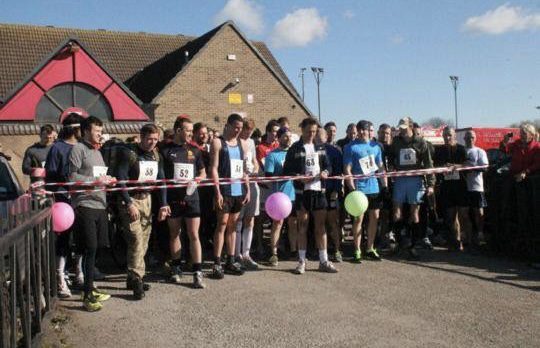 Have patience … there were times in recovery when I felt stuck. It’s a long process…

Stay strong and enjoy what you can. You might not think it. You will be getting there…a place where you can move on.